FREE SHIPPING ALWAYS ON ORDER $45 AND UP! This box was designed to add sweetness to your life. Total value $140+ This impressive gift box has a wide beauty of luxury & sweetness that is sure to make their day!💖

If you want to send with a *CARD* please contact our support team to make a note!

Everything was really pretty, the one thing is that the box was a little messed up and the hair clip is broken, besides that everything was okay I like the palette it has very vibrant and pigmented colours along with a variety of them, I loved it

Absolutely amazing product. They eyeshadows are so pigmented and the glitters are amazing. All the extra products in the box feel amazing and look amazing.

Amazing omg purr I love it the eyeshadows are pigmented and let’s not forget about the glitters holy they look so good but i swear if you don't be carefull you will have glitter on you for a couple days lol, the gel eyeliner are great and the gloss OMG! The hair clip are cute i saw people said it was breaking on them but not in my case thank you sm I will say it’s beginners friendly. It came in 2weeks like promised I live in France very impressive because COVID was going crazy when I ordered. I love it, I treat it as if it’s my new born (ง─ ͜ʖ─)ง if i have to buy it again i will because this quality for such a price worth It I used it the first time with no primer and it was pretty impressive considering that I didn’t use any primer of course I will recommend using a primer and the frekle pen is the exact same color as my natural ones 0-0!! Its pretty easy to use. The tracking website is a bit confusing but its not that big of a deal overall I recomend for the price and amount of product you get it’s pretty fair 👍👍

L
Lily Maguire
Get What You Pay For

Got this for retail therapy, came in about 2 weeks. The tracker loses some accuracy once it's local. The clips and other hair stuff are cute, but clearly break easily (tried to put a clip in and it immediately broke). You do not get the colors of eyeliner advertised (I really wanted that white and yellow too), but what you get is waterproof and smudge-proof, though it breaks easily. The brushes, especially the eye brushes, are actually really good, especially on a primer, but also just generally pick up pigment well. The larger brushes are eh, just okay.

The palette is the highlight, and it is super cute, but be aware. Palette has a bit of an odor, but nothing distracting, and one of the glitters straight up fell out onto the carpet, but I was able to recover it pretty easily. The glitters are high impact and can be used with the small brush for some cute glitter liner looks, but there's a lot of fallout AND YOU WILL BE GLITTERY FOR DAYS. The mattes, especially the darker mattes, are low pigment without a primer, but with primer, they really pop. The shimmers are high impact but smudge pretty easily. The colors are good in that there are wearable and artistic colors, but if you want a lot of yellows or greens, maybe check the other beauty box. The highlighters and shimmery bronzers are cute but too firm to pick up with a brush, and the matte brushes and bronzers do better as eyeshadows than their intended functions. They have wayyy too much pigment, so I would suggest using a lower quality blush for a payout that doesn't make you look like a puppet. I used this palette for a concert look, mostly the mattes, and glitters, and it actually held up really well, so that's nice. Overall, I would recommend this if you just want to get something as a gift for yourself without any expectations, or as a gift for someone whose makeup skills are capable enough to not make a total mess of it.

Overall, not the highest quality, but all the cons have equal pros, so I say go for it!

V
Virginia Mateo
I love it 😍

The box came well packed with everything inside. I love it is just beautiful especially the pallette.

The shipping was faster than expected.
I will definitely keep buying from you guys. 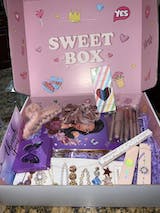